The Nurse and the Curse

"The Nurse and the Curse" is the third episode of season one of Baby Daddy. It first aired July 11, 2012.

Ben and Tucker take baby Emma to her first doctor's appointment, and Ben ends up asking Nurse Cassie out on a date. Riley is jealous of Ben's new relationship with Cassie, but tries to befriend her per Ben's request.

Meanwhile, Danny has his first hockey game with the NY Rangers and he's very superstitious - he wears an old high school jersey that has never been washed to every game and Bonnie caters to his every ritual. Tucker, in an effort to clean up the apartment, washes Danny's jersey by accident and it shrinks down to a tattered mess - Danny is devastated. At the game, Riley and Cassie get into a girl fight, which is featured on the jumbotron.[1]

At Emma's first doctor's appointment, Tucker starts taking some things and Ben thinks he would get them kicked out, but he gets distracted by tongue depressors. The nurse comes in and and they introduce themselves, Tucker telling her he and Ben weren't together. Ben wonders why and Tucker tells him it was because people assumed. He believes they didn't, but the nurse says she had assumed.

Ben mistakes her for a doctor and asks for her name and she tells him she was a nurse practitioner named Cassie. Cassie asks about the questions he didn't answer on the forms. He tells her it was complicated and Tucker explains the situation, saying it wasn't complicated. Ben tells her there was only on woman in his life and he wanted her to be healthy. Cassie gives him her number and tells him to call before leaving and telling them the doctor would be in. Tucker tries to get Ben to shove some gloves down his pants.

Riley tells Danny she was excited to see a game of his and Bonnie tells her she had seen all of his pro games and had been to his games in Calgary. Danny goes over a list with Bonnie and Riley can't believe he was still superstitious and asks about the rank jersey he used to wear in high school. Danny shows it to her, telling her he wore it under his uniform for every game. Bonnie says he wore it when he won his first championship when he was fourteen. She puts the jersey next to the window.

Later, it's Tucker's turn to do laundry, and he goes around picking up Emma's things and the jersey, thinking it belonged to her. Riley comes over to see if Ben need help with Emma and Danny tells her he was out on a date. Danny tells her to get over him, and she lies, saying she was. When Ben comes back, Danny takes Emma to go watch a movie while Ben talked to Riley about Cassie. He asks her to have lunch with Cassie and tell him what she thought. She doesn't want to at first, but Ben convinces her and calls her a great friend.

The next day Cassie and Riley come to the bar after going on a shopping trip. Cassie adores Riley and the time they spent together and after she leaves, Ben asks Riley what she thought of her. Riley lies to him and tells Danny she hated Cassie.

The next morning Riley comes over and tells the guys she brought donuts, but sees they're eating muffins and wonders who made them. Cassie comes in from getting ready before leaving. Bonnie comes in and says she just met a lovely girl in the hallway. While going through the laundry, she finds Danny’s jersey is now ruined and Tucker questions her about what it was. She shoos Tucker out of the room and Riley gets Danny to leave with her. Tucker comes back and thinks he understands the situation, but when Bonnie explains it, he realizes he hadn't understood.

Riley talks to Danny about how phony she thought Cassie was. She admits she was a little jealous and that ever since Ben came back into her life, the old feelings from high school came back. Danny tells her it was Ben's loss.

Bonnie tells Tucker about buying a new jersey and messing it up, but Tucker tapes the jersey up and thinks the problem was solved. Bonnie then tells him she was going to talk to Danny about growing up. She gets to the locker room and brings Danny his stuff, but he notices his jersey was missing. She tells him it had been destroyed, but he thinks she lost it. She tells him it was going to be okay, but he disagrees. Bonnie tells him none of his items were lucky and to not let some shirt determine his greatness.

During the game Ben thanks Riley for being nice to Cassie. Danny is sent to the penalty box and Ben leaves to talk to him. Cassie and Riley have a chat while he is gone. Danny tells Ben he felt free without his jersey when asked about what had gotten in to him and made him amazing. Cassie tells Riley she knew Riley liked Ben, but didn't feel threatened because Ben would always see her as "Fat Pants." Ben tells Danny to not be as violent and Danny, looking at the jumbotron which was showing Riley had Cassie in a headlock, thinks it wasn't him Ben should be worried about.

Later, Riley is embarrassed and talks to Danny about it, thinking Ben hated her. Danny tells her to tell Ben the truth about Cassie and move on, but she decides to leave. In the bar, Bonnie makes a toast to Danny and Tucker shows Danny that Emma was wearing his jersey in a mini version. Danny thinks that was the reason he won, but Bonnie thinks it was her pep talk to believe in himself.

Ben finds Riley and she apologizes for putting Cassie in a headlock. She asks how she was doing and Ben tells her they broke up. He tells her that Cassie thought that Riley had a crush on him because he had talked about her a lot. He told Cassie he hoped Emma grew up to be just like Riley. They toast to friends and when Ben leaves, Riley mutters that she still hated that word.

At Ben, Danny, and Tucker's apartment, they and Riley watch Danny’s game winning goal on television, where the fight between Cassie and Riley is also shown. 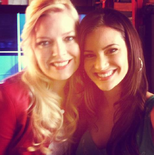 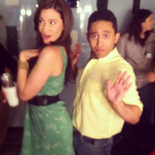