Married to the Job

"Married to the Job" is the fifth episode of the first season of Baby Daddy. It first aired July 25, 2012.

When Ben's boss believes Ben and Riley are married, Ben uses her to get a promotion. Meanwhile, Bonnie buys Emma a new stroller, but the guys don't like it and trade it for a new one that catches women's attention. 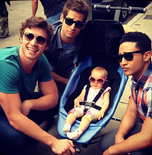