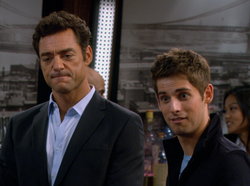 Married to the Job[]

Ben learns that the position of manager is open at the bar he works, and he tells his boss Henderson that he should get it. Henderson doesn't consider giving him the job until he believes that Riley and Emma are Ben's wife and daughter. Ben notices the mistake, but doesn't tell him because Henderson wants to have a meeting with Ben and his family about the manager position.