Cassie is a nurse practitioner who dated Ben in The Nurse and the Curse. She is portrayed by Briana Lane.

The Nurse and the Curse

Ben and Tucker take Emma to her first doctor's office and are messing around with the supplies when the nurse comes in. They introduce themselves, Tucker telling her he and Ben weren't together. Ben wonders why he always told people that and Tucker tells him it was because people assumed. Ben believes they didn't, but the nurse says she had assumed.

Ben mistakes her for a doctor and asks for her name and she tells him she was a nurse practitioner named Cassie. Cassie asks about the questions he didn't answer on the forms. He tells her it was complicated and Tucker explains the situation, saying it wasn't complicated. Ben tells her there was only on woman in his life and he wanted her to be healthy. Cassie gives him her number and tells him to call before leaving and telling them the doctor would be in.

Later, Riley comes over to see if Ben need help with Emma and Danny tells her he was out on a date. When Ben comes back, Danny takes Emma to go watch a movie while Ben talked to Riley about Cassie. He asks her to have lunch with Cassie and tell him what she thought. Riley doesn't want to at first, but Ben convinces her, saying he wanted to make sure she was the kind of person he wanted around his child.

The next day Cassie and Riley come to the bar after going on a shopping trip. Cassie adores Riley and the time they spent together and asks if they could do it again and Riley hesitantly agrees.

The next morning Riley comes over to her friends' apartment and tells them she brought donuts, but sees they're eating muffins and wonders who made them. Cassie comes in from getting ready and kisses Ben before leaving. Bonnie comes in and says she just met a lovely girl in the hallway.

During Danny's game, Ben thanks Riley for being nice to Cassie. When Danny is sent to the penalty box, Ben leaves to talk to him. Cassie and Riley have a chat while he is gone. Cassie tells Riley she knew Riley liked Ben, but she didn't feel threatened because Ben would always see her as "Fat Pants." Meanwhile, Ben tells Danny to not be so violent and Danny, looking at the jumbotron which was showing Riley had Cassie in a headlock, thinks it wasn't him Ben should be worried about.

Ben later tells Riley he and Cassie had broken up and that Cassie had thought Riley had a crush on him, to which Riley weakly denies.

Cassie first met Ben when he brought his daughter to her first checkup. She gives him her number after seeing how great a father he was and tells him to call her. They soon begin to date, but breakup after Riley put her in a headlock. Ben tells Riley that Cassie thought Riley had a crush on him because of how much he talked about her to Cassie, saying things such as he hoped Emma would be like Riley when she grew up.

Though they rarely interacted, Cassie made breakfast for the guys and was excited that she knew a professional hockey player, going as far as to pinching his cheeks.

Cassie and Tucker also rarely interacted, but Tucker first met her at Emma's doctor's appointment where she had assumed Ben and Tucker were together. After she and Ben began dating, she made breakfast for the guys.

Cassie and Bonnie's little interaction wasn't shown, but after Cassie leaves after making her boyfriend and his brother and friend breakfast, Bonnie comes in and tells them she had just met a lovely girl out in the hallway.

Riley doesn't like Cassie because of her feelings for Ben, but befriends her at the request of Ben. They go on a shopping trip and Cassie, having had fun, requests they go on another. At Danny's first game with the NY Rangers, Ben leaves to go talk to Danny and Cassie and Riley have a chat. Cassie tells Riley she knew Riley liked Ben, but she didn't feel threatened because Ben would always see her as "Fat Pants." Riley puts her in a headlock which is featured on the jumbotron. After the game, Riley tells Danny how embarrassed she was. 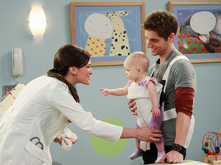 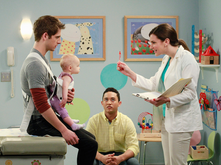 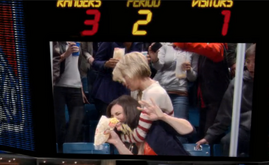