About ABC Family's Baby Daddy
The new ABC Family Original Comedy Baby Daddy is a half-hour series about Ben who, in his 20s, becomes a surprise dad to a baby girl when she's left on his doorstep by an ex-girlfriend. Ben decides to raise the baby with the help of his mother Bonnie, his brother Danny, his best buddy Tucker and his close female friend, Riley, who is harboring a secret crush on him. Baby Daddy premiered June 20, 2012 on ABC Family, with new episodes Wednesdays at 8:30.

Go to these sites for info or for help with your own wiki!

Disclaimer
The participants of this wiki do not own anything pertaining to Baby Daddy. They also do not own any of the pictures posted here unless stated otherwise. They're just fans of the show who also like making wikis.

Ben: There is no reason I should be on the website.
Tucker: Susie Kettle.
Ben: Oh, maybe.
Riley: W-Wait. Susie Kettle? Bridesmaid Susie Kettle?
Ben: Yeah, most likely that Susie Kettle. But nothing happened. I was just all, "Hey, Sus, nice catching up, maybe I'll call you some time."
Tucker: Yeah, was that before or after you were making out with her on the dance floor?
Ben: Possibly after.
Riley: You made out with Susie at the wedding?
Ben: Just a little.
Tucker: Girl, we had to get the hose.

I'm Not That Guy 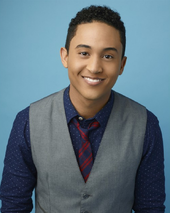 Tucker Dobbs is the best friend of Ben. When Ben becomes a father to a baby left on his doorstep by an ex-girlfriend, Tucker is one of those who help Ben raise the girl. Tahj Mowry describes Tucker as the "friend everyone wants" and "being mean at times". The ABC Family website says Tucker "always makes us laugh", but if you touch his food, "he'll probably make you cry!"

Retrieved from "https://abcfamilysbabydaddy.fandom.com/wiki/ABC_Family%27s_Baby_Daddy_Wiki?oldid=5000"
Community content is available under CC-BY-SA unless otherwise noted.